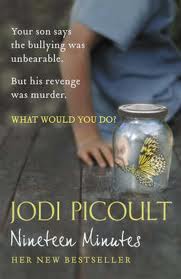 Thanks to the generous help from fellow blogger Opinionated Man, http://aopinionatedman.com/ I have had quite a few new followers in recent weeks. Therefore, I feel the need to mention that when I first started Peaceful Rampage, I compared and contrasted aspects from my book “He Was Weird” to four other books that were about school shootings. Obviously, one of these was “19 Minutes” by Jodi Picoult. I won’t go into unnecessary details about the book but you can read my previous posts about Jodi’s best seller. A little boasting here, but she read two of my posts about her book and she emailed me stating that my comments were very thoughtful and very fair. Although I was slightly disappointed that she won’t take up my idea about a joint writing venture on the subject.

With this post, I am relating “19 Minutes” to my previous post about teachers encouraging bullying. Let’s start with the protagonist, Peter Houghton, the boy who gets badly bullied from day one to the point where at 17, shoots up his school. That’s all we really need to know about him here. Now, let’s look at the teachers. First, there is Ed McCabe, a math teacher who tries to help Peter somewhat, even bailing him out of a potentially bad situation when Peter goes to a gay bar. The reason why I say somewhat here is that Ed does little or nothing about the bullying Peter is getting from the jocks. While he doesn’t actually encourage the bullying, he does nothing more after Peter refuses any help from the teacher. Peter continues to get bullied. The twist in the story is that he is the only teacher who Peter shoots in his rampage but it has little to do with his previous interactions with him. Ed McCabe sacrifices himself to save the children in his class.

The second teacher in the story is Dusty Spears, a gym teacher and sports coach at the school. He passively encourages the bullying of Peter by turning a blind eye to it and using the handwringing “boys will be boys” excuse, even at Peter’s trial. It can be argued that Spears is a typical sports coach in the sense that since it is the players on his team who are bullying Peter, he takes a even more distorted view of the bullying. After all, he wants to win and having one of his students suspended or even kicked off the team by the school won’t help his cause. Therefore, he does bury his head in the sand and leaves poor Peter to his fate.

In both cases, there is a case that both teachers contributed to the bullying of Peter which led to him snapping and shooting up his school. True, that of the gym teacher was more apparent and contributed a great deal more, even encouraging the bullying by his attitude about it. While it’s not actually mentioned in the story, I can plainly see that the bullies would have taken this non action as a green light to do whatever they want. The fact that he seems to defend their actions is even more damning. However, the math teacher isn’t blameless either. While I can sympathise with the enormous workload of teachers having taught myself, Ed still could have informed senior management or wrote a statement, anything to draw the appropriate attention to the bullying. That would have saved many lives in the story. The sad and shocking thing is that this readily happens in real life too.

11 thoughts on “Do Teachers Encourage Bullying? A View From Jodi Picoult’s “19 Minutes””