Just like it says in the title, recently, I have been thinking about school shootings. It has always been in my mind since the day I thought about writing “He Was Weird,” which was five years ago now. What brought it to my mind’s forefront was an article I read on line last week. It was an advice piece given by some security expert on what students should do if they are confronted by a shooter in their school. The expert says that students should throw whatever comes to hand at the shooter, books, pencils, chairs etc. The theory is that objects flying in the shooter’s direction will prevent him/her from pulling the trigger, thus saving lives. After quashing my initial reaction to crease over in laughter, I realise that this tactic might work if it’s the only viable alternative. That there are no escape routes and no one else to tackle the shooter. However, I can easily see a lot of lives lost if this were attempted as the norm. I’m not an expert but my advice to anyone confronted by a shooter is, if they’re able, to get the hell out of dodge!

I know that the above tactic would not have worked on Mark when he shoots up his school in “He Was Weird.” Main reason is the fact that his shooting spree happens on the school playground and he doesn’t let anyone get near enough to throw anything at him.

Now I come to the argument that the only way to stop a bad guy with a gun is a good guy with a gun. There is a lot of truth in that belief. Police officers and others duly trained in such situations would stop a school shooter cold. However, it would probably not be the case with armed teachers or pupils being allowed to conceal and carry. The latter opens a totally different can of worms that I won’t go into now. Not long ago, I read that simulations where a ‘good guy’ with a gun was on hand to stop a school shooter were played out. In all of those scenarios, the good guy with the gun failed to prevent a reduction in the casualties and in some cases, inflicted more. To learn more, click on this link: http://www.vox.com/policy-and-politics/2015/12/11/9891664/daily-show-mass-shootings

Once again, I put the above situation with Mark in the story. Would an armed teacher or student have stopped him from shooting so many people? My answer is probably not. Mark’s biggest fear when planning his big day was being taken alive. If there had been someone with a gun, he would have been prepared for that as well. Even if the good guy with the gun was successful in shooting Mark, that would have been what he wanted in the first place. 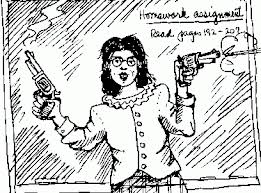 Further thoughts about this has led me to think about “He Was Weird.” When writing the story, it was never my intention to go fully into the gun debate. Yes, it does get mentioned because after all, a thirteen year old boy is able to get his hands on an Uzi and a nine millimetre pistol and reek so much havoc in his school. However, I didn’t think that was the important part of the story and back then, I wasn’t totally sure where I stood on the issue of guns.

Now I am sure. First, I’m a realist. No matter how much many Americans want the second amendment repealed, it will never be. The NRA lobby is too strong and there are too many Americans who don’t want to give up their guns, responsible owners or otherwise. However, not too long ago, I heard something said and if it’s true, it’s completely shocking. Apparently, there are enough gun laws on the books to sufficiently deal with the gun problem. However, these laws aren’t being adequately enforced. My question to this is “Why the hell not?” The whole purpose of the law is to protect the innocent and with guns, there is a more important need for the laws to be properly enforced and it’s wrong if they are not being so. So, I propose that we start enforcing the gun laws we already have. Gun owners shouldn’t have a problem with this because if their gun ownership is within the law, then there is no threat of the law taking them. For the anti-gun lobby, they should have the satisfaction that something is being done to control guns by making sure the laws are being followed. Furthermore, if the proper enforcement of gun laws don’t adequately solve the problem, then we can talk about toughening the gun laws.

The question of armed security guards in schools has become a major topic for discussion and debate over the recent years, so I thought I would venture forth with my thoughts on the subject. In a scene in “He Was Weird,” a Hollywood actor with conservative views addresses a meeting of the NRA about a month after Mark carries out his extravaganza on the school. During his speech, the actor explains that an armed security guard in the school would have dropped Mark before he got a chance to do so much damage. I was inspired to put this into the story because of it being the subject of so much media attention. However, I do not go further into the debate because I didn’t feel that was the point of the novel.

A school shooting at Arapahoe High School in Centennial, Colorado that occurred just before Christmas has brought the debate on armed guards in schools more into the limelight. The investigation states that the fact there was an armed deputy on duty at the school as the reason the casualty count was so low. In this instance, the shooter, who was about to be confronted by an armed officer, took his own life. Many applaud the fact that in this case, the armed guard proved to be a deterrent in the school shooting and conservatives are now rubbing this point into the liberals noses.

Well, I consider myself a bit of a liberal. However, I do not oppose the use of armed guards in schools if that is what is needed to make schools safer. My lament is over the fact that it has had to come down to this in the first place. The fact that such a thing is needed to ensure safe schools creates a sour taste in my mouth but I know that at the moment, it needs to be done especially if the other issues as to why a kid would bring a gun to school in the first place aren’t being looked at properly.

The whole thing now has my strange but wonderful mind going off in another direction. In regards to the book, would Mark have not carried out his atrocity if there had been an armed guard at the school? Getting into Mark’s mind, I think he would have, he would have just had to alter his plan. Since his deed was done in the playground before the official start of school, he would have tried to ascertain whether or not the guard would have been on duty. Even so, he would have still secured his first killing field before the alarm had been raised anyway so this would only mean that he would have had to alter his plan for the second one or abandon it completely. This still might have saved some lives but I emphasise might because the one major aspect in his plan was that Mark in no way wanted to be taken alive. Therefore, I speculate that, in order to save lives, the guard would have shot Mark dead on sight and that’s what he would have wanted.