While “He Was Weird” was set in modern times, the experiences which influenced me to write the story happened when I was growing up in the 1970s. The attitude towards bullying back then was basically to ignore it and carry on with the age on philosophy of blaming the victim. Parents, teachers and other officials were very reluctant and even unwilling to intervene in bullying and I think the best example to explain why is to use the film set in that time period, “Dazed and Confused. 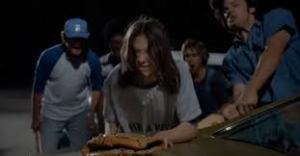 Getting the freshmen, a scene from “Dazed and Confused.”

The film is set in 1976 in Austin, Texas and the entire film takes place on the last day of school. In the early scenes of the movie, some of the students who will become seniors in the following September go out looking to haze students who will become freshmen then. Gangs of seniors find freshmen either alone or in very small groups and hold them down while each senior takes a turn hitting the freshman with a paddle. Now one would think that someone would step in and stop this practice, well they didn’t. The excuse used by many parents in the film, especially fathers, was that if they went to school authorities and stopped their son getting beaten with a paddle, the seniors would retaliate by doing worse things to that person and probably for a lot longer. The belief was to let the kid take a few whacks and get it over with, besides, it didn’t hurt that much. Of course, there was no consideration for how the victim might feel about it.

School officials were pretty much of the same philosophy. That worse things might happen to the victim if they intervened. After all, it was only a bit of harmless fun. Furthermore, as it happened after the last day of school, the school could easily play the ‘they’re not responsible’ card and get away with it. As for the police, even though this was a clear case of assault, they probably wouldn’t get involved unless it was the parents of some rich kid making a stink. In any case, the bury your head in the sand and ignore it approach was a clear victory for the bullies in the film and the 1970s. I don’t know if it still goes on anywhere today but Family Guy did base an episode on the film where Chris is beaten with paddles because he is a freshman. 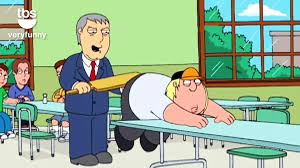 I never got beaten with a paddle when I was a freshman, most of the bullying I had suffered was in junior high school and pretty much behind me. Although those experiences did keep my anxiety levels very high throughout high school. However, the attitudes by many of the adults were the same. Most, especially teachers, chose to bury their head in the sand while I was getting bullied and some even blamed me for being the victim. Schools and unfortunately my family at times, held the belief that if they intervened too much, worse things would happen to me. Therefore, most of the bullying went unpunished and that eventually led to it being unreported because I knew that if I did, nothing much would come of it. The 70s attitude toward bullying let me down immensely.

The scary thing was that those who have read “He Was Weird” and fed back to me on it, would not have known that the experiences drawn on to write it happened four decades earlier. The bullying was pretty much the same, except the cyber bullying that occurs in the story. I had no internet access back then. Another scary bit was from a scene in the book where Mark is bullied at the local shop. He looks to the store manager for help but the manager responds by saying, “You know you’re going to get picked on so why bother coming in here.” That was the classic 70s attitude but readers have accepted it as if it had happened in modern times. So, bullying hasn’t changed. It still goes on but what has changed is the way it’s viewed by adults and more are willing to step in and deal with it. However, there is still a long way to go.