Here I was ready to write my next post in the series of “Things That Prove My Insanity” when my Google Alerts pointed me to a story which definitely aroused my interest. The article, which I am now going to share, was about a fifteen year old boy who was sentenced to six years in jail for plotting to carry out a school shooting. If it wasn’t for the title, most of you would probably be thinking, “Where in America did this occur?” The answer was that it didn’t, it occurred in the UK, a country where guns are much more difficult to get and where many people living there like to point an accusing finger at the United States for all the school shootings that happen there.

The youth was ‘seconds away’ from carrying out the attack at Higham Lane school, a court heard.

The teenager was reportedly just second away from opening fire on his fellow students when he made a call to the police. An emergency call handler then “averted disaster” by convincing the teen to disassemble his weapon, while officers headed to the scene. The school was placed on lockdown at approximately 9:15 a.m., while the police took the teenagerinto custody.

The International Business Times quotes Judge Andrew Lockhart QC of the Warwick Crown Court as saying the teenager had been a moment away from committing a heinous crime.

The judge spoke to the teenager, saying he had his face covered, a knife and shotgun in hand and was preparing to shoot at anyone in the school. Lockhart said that anyone who would have been his target would have been a “wholly innocent victim.”

Impossible to predict how many would have been shot

The judge went on to tell the teenager that if he had opened fire, he had no doubt death and serious injury would have occurred, while saying it was impossible for him to predict how many victims would have been affected. Lockhart said only a “moment in time” had separated both students and school staff from being a victim of a “terrible event” and a crime that would have been added to the history of wicked crimes committed in the U.K. 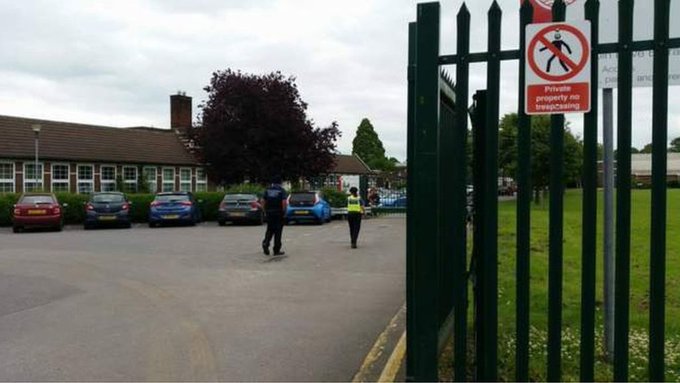 Nuneaton schoolboy who backed out of mass shooting detained: The boy, who was armed with a shotgun, had been… http://dlvr.it/PljWcs

Lockhart went on to praise the emergency call handler who talked the teenager down from his plans, saying his actions had been “exemplary.” The judge added that the call handler acted in such a way that a potential disaster was averted.

In the teenager’s defense, Delroy Henry said that the boy’s plans to launch a #Shooting Spree resulted from a “loss of good sense,” adding that a prison term would not benefit his mental health. He added that the teenager had ultimately cooperated with police and taken the decision not to proceed.

Fellow students at Higham Lane School claimed at the time that the teenager had been the subject of bullying and believed this may be why he made the decision to bring a shotgun into the school. The teen is receiving mental health treatment to aid in his rehabilitation.

The 15-year-old will serve at least half of his six-year sentence in jail, followed by release on license for the remainder of his sentence. According to the Offenders’ Families Helpline, this means the teen must adhere to certain rules and will not be allowed to travel outside of the U.K.”

For the record, I am in no way baiting British people because a near school shooting happened in their country. In fact, this can provide an opportunity for Britain not to repeat the same old mistakes that never get sorted in American school shootings. We know the boy who planned the massacre was bullied, this should definitely need to be addressed. Plus, he had mental health issues, this must not be ignored either. These are both reasons that cause young people to ‘snap’ and carry out or plan to carry out large scale atrocities. In this case, we need to be thankful that the boy contacted the authorities and asked for help. While, I don’t question the punishment handed out by the judge, (in America it would have been more severe), what this boy needs is help while he is serving his sentence. Plus, bullying needs to be looked at even more because British schools can no longer assume that a victim will not have access to guns.

Shameless link to “He Was Weird”: In the story, a boy from Worcester, Great Britain posts on Mark’s Facebook page that he wishes he could get a hold of guns in the UK so he could teach his bullies a lesson. We now see that this has become a frightful reality.